Pruning is a technique that is employed by gardeners in order to control growth, remove dead or diseased wood or stimulate the formation of flowers and fruit buds. The most economical pruning is done early in the season, when buds begin to break, and one can pinch off the soft tissue with one's fingers (hence the expression "nipped in the bud"). Many home fruit growers make the mistake of planting a tree, then neglecting it until it begins to bear. But careful attention to pruning and training young trees will ultimately determine their productivity and longevity. Good pruning and training will also prevent later injury from weak crotches that break under snow or fruit load.

In order to obtain a better understanding of how to prune plants properly, it is useful to have some underlying knowledge of how pruning works, and how it affects the way in which plants grow.

Plants form new tissue in an area called the meristem, located near the tips of roots and shoots, where active cell division takes place. Meristem growth is aimed at ensuring that leaves are quickly elevated into sunlight, and that roots are able to penetrate deeply into the soil. Once adequate height and length is achieved by the stems and roots, they will begin to thicken to give support to the plant. On the shoots, these growing tips of the plant are known as apical buds. The apical bud (or tip) produces the growth hormone auxin, which not only promotes cell division, but also diffuses downwards and inhibits the development of lateral bud growth which would otherwise compete with the apical tip for light and nutrients. Removing the apical tip and its suppressive hormone allows the lower dormant lateral buds to develop, and the buds between the leaf stalk and stem produce new shoots which compete to become the lead growth. Manipulating this natural response to damage (known as the principle of apical dominance) by processes such as pruning (as well as coppicing and pollarding) allows the horticulturist to determine the shape, size and productivity of many fruiting trees and bushes. The main aim when pruning fruit trees is usually to obtain a decent crop of fruit rather than a tree with an abundance of lush yet unproductive foliage. Unpruned trees tend to produce large crops of small, worthless fruit often damaged by pests and diseases, and much of the crop is out of reach at the top of the tree. Branches can become broken by the weight of the crop, and the cropping may become biennial (that is, only bearing fruit every other year). Overpruned trees on the other hand tend to produce light crops of large, flavourless fruit that does not store well. Pruning is therefore carried out to achieve a balance between shoot growth and fruit production.

Formative pruning of apple (Malus domesticata) and pear (Pyrus communis) trees (the ‘pome’ fruits- the ‘stone’ fruits such as cherries, plums, gages, etc have different requirements and should not be pruned during the dormant months) should be carried out during the dormant winter months between November and March during the early years of the tree’s life in order to develop a strong framework capable of bearing the weight of the crops that will be borne in later years. This involves hard pruning, although in later years pruning will be lighter and carried out in order to encourage fruiting.

A maiden whip (that is, a one year old tree with no side shoots) should be pruned to a bud with two buds below it at about 30” from the ground immediately after planting in order to produce primary branches during the first growing season. A feathered maiden (that is, a one year old tree with several side branches) should have it’s main stem pruned back to three or four strong shoots at 30” from the ground. Side shoots should be shortened by two thirds of their length to an upward or outward facing bud. Lower shoots should be removed flush with the stem. 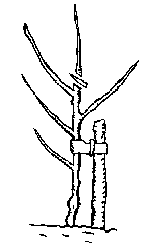 Remove any lower shoots and prune between three and five of the best placed shoots by half to an upwards or outwards facing bud in order to form what will become the tree's main structural branches. Remove any inwards facing shoots. 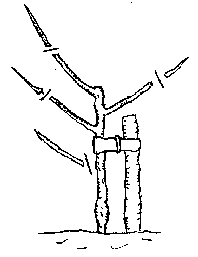 Prune the leading shoots of branches selected to extend the framework by half to a bud facing in the desired direction. Select four good laterals to fill the framework and shorten these by a half. Prune any remaining laterals to four buds to form fruiting spurs. 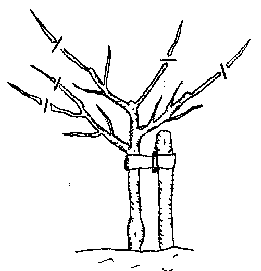 The tree will have begun to fruit and only limited formative pruning is now required. Shorten leaders by one third and prune laterals not required to extend the framework to four buds. 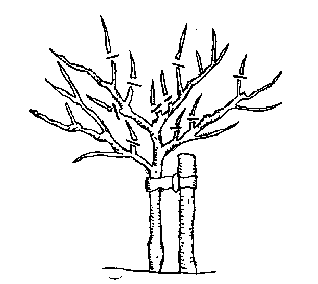 From year five onwards the tree is considered to be established and should be annually pruned as described in the following section.

Before pruning it is important to distinguish between spur bearing and tip bearing varieties. The former, which is the most common type, bear most of their fruit on older wood, and include apples such as ‘Coaxes Orange Pippin’, ‘James Grieve’ and ‘Sunset’, and the pears ‘Conference’, ‘Doyenne du Commice’ and ‘Williams Bon Chretien’. Tip bearers on the other hand produce most of their fruit buds at the tips of slender shoots grown the previous summer, and include the apples ‘Worcester Pearmain’ and ‘Irish Peach’ and the pears ‘Jargonelle’ and ‘Josephine de Malines’. There are basically three types of pruning that are applied once the main shape of the tree has been established. These are;

This also depends on the tendency of many apple and pear trees to form flower buds on unpruned two year old laterals. It is a technique best utilised for the strong laterals on the outer part of the tree where there is room for such growth. 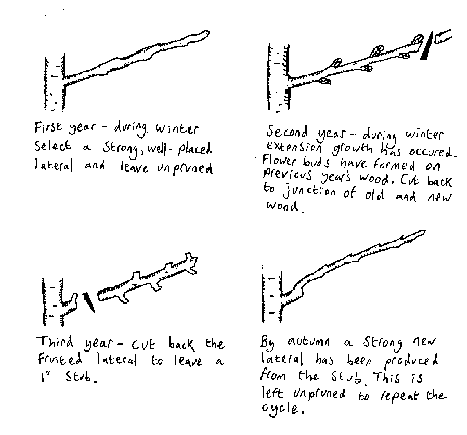 This is carried out on the tree as a whole, and is aimed at keeping the tree and it’s environment healthy, eg, by keeping the centre open so that air can circulate, removing dead or diseased wood, preventing branches from becoming over crowded (branches should be roughly 18” apart and spurs not less than 9” apart along the branch framework), and preventing any branches from crossing.

Tip bearers should be pruned lightly in winter using the regulatory system (see above). any maiden shoots less than 9” in length should be left untouched as they have fruit buds at their tips. Longer shoots are spur pruned to prevent over-crowding and to stimulate the production of more short tip bearing shoots the following year. Branch leaders are ‘tipped’, removing the top three or four buds to a bud facing in the desired direction to make them branch out and so produce more tip bearing shoots.

Retrieved from "https://permaculture.fandom.com/wiki/Pruning_fruit_trees?oldid=2424"
Community content is available under CC-BY-SA unless otherwise noted.