In part based on the model of the Keralan home gardens, forest gardening has been pioneered by the late Robert Hart, whose one eighth of an acre (500 m²) plot at Wenlock Edge in Shropshire has been described as possibly the only fully developed working permaculture site in the UK.

Robert began the project over thirty years ago with the intention of providing a healthy and therapeutic environment for himself and his brother Lacon, born with severe learning disabilities.

Starting as relatively conventional smallholders, Robert soon discovered that maintaining large annual vegetable beds, rearing livestock and taking care of an orchard were tasks beyond their strength. However, he also observed that a small bed of perennial vegetables and herbs they had planted up was looking after itself with little or no intervention. Furthermore, these plants provided interesting and unusual additions to the diet, as well as seeming to promote health and vigour in both body and mind.

Noting the maxim of Hippocrates to "make food your medicine and medicine your food", Robert adopted a vegan, 90% raw food diet. He also began to examine the interactions and relationships that take place between plants in natural systems, particularly in woodland, the climax ecosystem of a cool temperate region such as the British Isles. This led him to evolve the concept of the "Forest Garden": Based on the observation that the natural forest can be divided into distinct layers or "storeys", he used inter-cropping to develop an existing small orchard of apples and pears into an edible polyculture landscape consisting of seven levels: 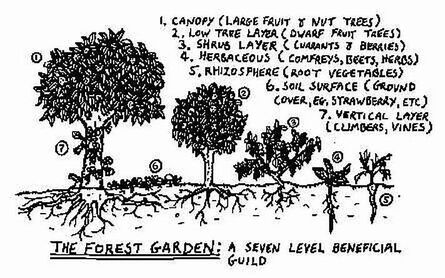 Ken Fern and Plants for a Futureadoptedthe name "Woodland Gardening". A key critique of Hart's system was in the selection of plants used. Most of the traditional crops grown today such as carrotsaresun loving plants not well selected for the more shady forest garden system. Fern's idea was that for a successful temperate forest garden a wider range of shade tolerant plants would need to be used. To this end Plants For A Future compiled a plant database suitable for such a system.

The Agroforestry Research Trust has a 2 acre forest garden, next to the Schumacher College in Dartington, Devon. It makes heavy use of ground cover plants to restrict the growth of weeds.

There has been some criticism as to whether the home gardens system developed in the tropics are a suitable design for use in a temperate climate.

Retrieved from "https://permaculture.fandom.com/wiki/Forest_garden?oldid=4075"
Community content is available under CC-BY-SA unless otherwise noted.